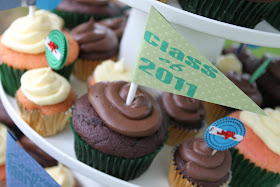 Every year, we usually have to add in at least one wedding or graduation to our busy Summer schedule. With all of my family living in the general area, it always seems like there's one cousin or another graduating, which usually means a party to attend.

Well, this year it happened to be my little sister (and, yes, in case you were wondering there is 15 years difference between us)! 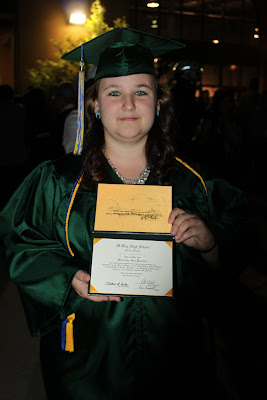 Being the party planning nut that I am, I of course offered to throw her a big graduation party. We also decided since she turned 18 just a few days after graduating, that we'd celebrate that too!

This was definitely one of my favorite parties to throw! I know I say that after every party (haha), but I really enjoyed putting everything together and really staying within my budget here. Also, it wasn't like my usual kids parties or showers where there would be a big theme to tie it all together. I was really just relying on the graduation aspect of it to make everything work.

Thanks to Pinterest I found some really great ideas and combined with some of my own (hey, I do have a few moments of genius myself from time-to-time!) came up with a great plan!

Besides being on a pretty strict budget, I also wanted to try to keep things low-key (hence the lack of theme) because my sister is a pretty low-fuss kind of gal. The one thing I wanted to try incorporating, at least minimally, was an artistic aspect to the party. Mercedes has always been very much into art, loves sketching and drawing, and is even thinking about attending The Art Institute.

So, one of the first things that popped into my mind was a way to use that in a fun way.
I decided instead of a guest book or the now-usual picture with mat frame for guests to sign, I would have them get in touch with their inner artist! 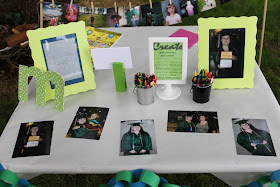 Something I tried doing, since I was on a tight budget, was to use things I already had.

I put together this little sign and added it to a frame ($.99 at IKEA!) I had had for a previous party. I and added some blank notecards my mom had laying around and raided my party favor stash for crayons. I set everything on the gift table for the guests to use, and it turned out perfect! The guests really got into writing, making up limericks and drawing and Mercedes loved all the finished 'pieces.' 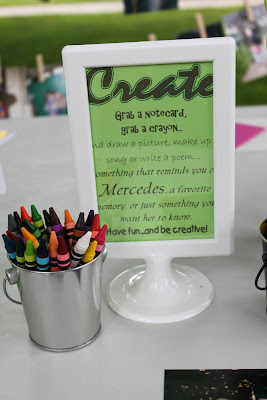 I decided to take the art idea one step further, and also decided to add butcher paper to all of the tables for guests to doodle on. I placed little buckets (these were also left over from another party) of crayons out the tables as well. The guests really seemed to enjoy drawing on the tables and Mercedes even took home some of the art after the party.

When I saw the vellum insert that went into her graduation announcements, I knew I had to find a way to use it! I love vellum, and this was basically a free decoration (and free is always welcome!)!
I had a couple green (the school colors were blue and green) picture frames I borrowed from my daughter's room, added that to one and a picture of my sister on graduation day in the other. Then I just scattered other pictures around. It looked great and really tied everything together! 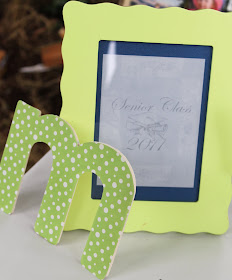 Oh, and the 'M?' I bought it at Michaels for $1 and had planned on modgepodging it to match everything better. Then I forgot about it and found it at about midnight before the party! So, I broke out my trusty double-sided tape and voila!

I also knew I wanted to display a lot of photos of Mercedes through the years and wanted to display them in a unique way. I toyed around with several ideas, but the one that kept coming back to me was the idea of stringing them up somehow. To me, that seemed like a carefree kind of way to show them off, which was what my goal was for the day. :o) 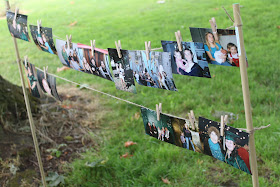 I had seen some different pictures of people doing something similar for other parties, but they usually used a tree to hang a line for the pictures. Since our party was in a public park, I didn't really want to go around stabbing all the trees.
So, after a field trip to Lowes I came up with an idea of using wooden dowels and the hubby said he would make some blocks to screw them into.

In the end, we had to scrap the blocks and just stick the dowels into the ground (thank goodness it rained a few days earlier!), so they could be seen above the tables. Usually these kind of last minute changes stress me out and I end up unhappy with the result, but this turned out perfectly! I really liked how nice they looked without being formal. The only thing that disappointed me was not having enough space for all the pictures I had gathered. I should have bought taller dowels, so we had more space for extra line, but I think all-in-all it looked great!

I tried to keep the decorations kind of simple, especially since I wasn't sure exactly where everything would go with the party being outdoors. 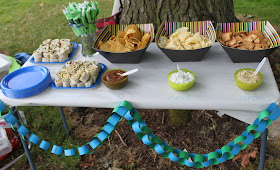 I fell in love with the idea of using paper chains as a party decoration, after seeing it at a party online. And, it seemed like the perfect cost-effective, understated idea I had been trying to go for. So, after raiding my scrapbooking supply, I came up with blue and green cardstock. Then I bought a couple sheets of gold (part of the school colors) to go along with it. I ended up with three paper chains; two were a mixture of the blue and green and one was a solid gold. Once we got out there though, we realized we needed to once again improvise, so my awesome party planning partner, Liz, split them up and hung them from all the tables. It looked great!

I decided to go for a simple banner saying, 'Congrats Mercedes' to hang from the main table. I used a fun background in my Printshop program that looked like notebook paper and backed that with some blue scrapbook paper. 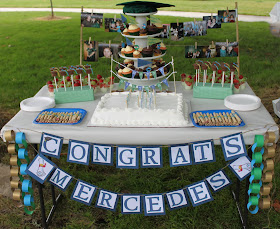 Since the banner was pretty simple, I decided to add some other aspects of the party into the cupcake toppers.
I made two different styles; one went on the mini cupcakes and one on the regular cupcakes.
For the minis, I used a circle stamp I got from Michaels then put a sticker in the middle. 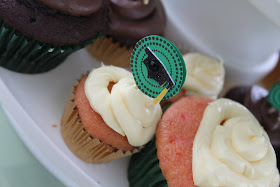 The regular cupcake picks, I used scrapbook paper and printed, 'Class of 2011' and 'Congrats Mercedes' on them then cut them into pennant shapes. 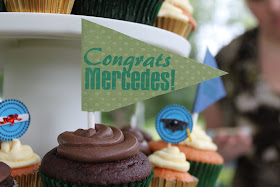 Something pretty simple I also did was to use regular dessert napkins and stamp directly on them. I found a ($1) graduation stamp at Michaels and stamped a graduation hat into the middle of each napkin, then rolled them up with some plasticware inside. I finished them off with a piece of ribbon tied around the middle and they looked really cute (and, a lot of guests complimented me on making them look like diplomas which wasn't even my intention!). I then added some chick peas (got in bulk at my local grocery store for under a dollar) to the bottom of one of my vases, and placed the rolls inside (the chick peas allowed for extra space in the top of my hourglass shaped vase to fit more of the rolls). Super-simple, super-cute and super-cute (less than $5 since I already had the vase, napkins, ribbon and plasticware and just had to purchase the peas, stamp and inkpad)! 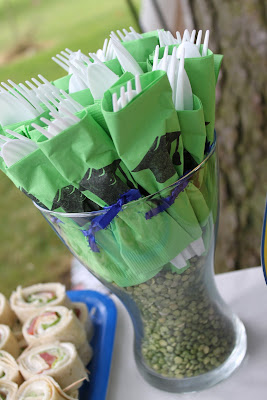 And my favorite aspect of the (well, most partys...lol) party...the food!
We really wanted to keep the food simple, so decided to do an open house style from 2-5, in between meal times.

In keeping with the arty theme, I wrote the food labels directly on the butcher paper that covered the tables. This was another original idea I had, and one that I was set on making happen. It looked cute and save some time and effort from having to make labels! 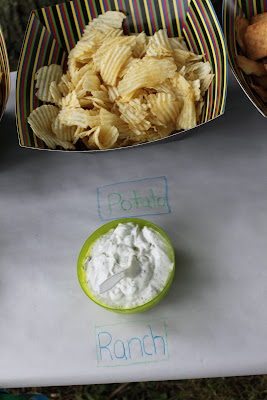 We opted for turkey and ham wraps wraps (did you know Trader Joes has square tortillas?? Perfect for wraps!) with various other fillings. My mom was in charge of them, and they turned out so great! 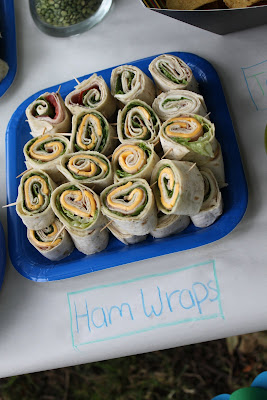 We also got different chips and dips and had some fresh fruit (strawberries were just picked by us two days earlier!) with dip (we put the fruit dip in the bottom of some mini plastic cups, then added the fruit to the top...they were very popular!). 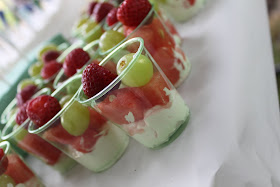 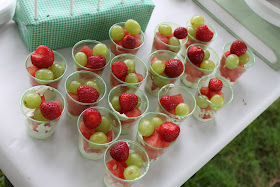 And, the desserts were the best part...!

I got the inspiration for these fun treats from Bakerella.
These certainly requied a little extra work, but they also turned out better than I expected.  Despite the tediousness, they so were so worth it and ended up being the hit of the party! 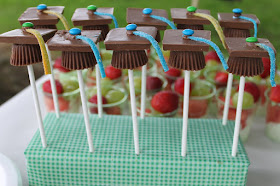 I found another fun idea on Pinterest of using pirouhettes with a candy tie around to look like diplomas. These also proved a bit tedious, especially since I had to cut apart the color 'ropes' from the rainbow candy belts (bought at Target in the dollar spot). They also got rave reviews and were gone before I knew it! 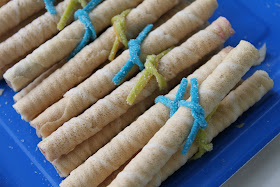 And, of course we had the cupcakes plus a birthday cake (Costco) too. 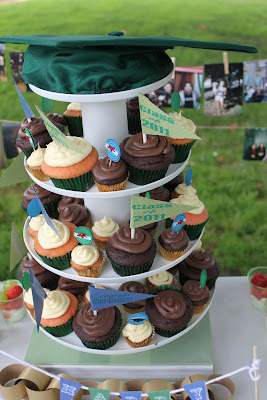 Since the cake was really the only birthday part, I made an outline of '18' in birthday candles then made a mini pennant to go on top of the cake (using TomKat Studio's free printable!) 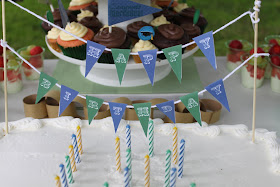 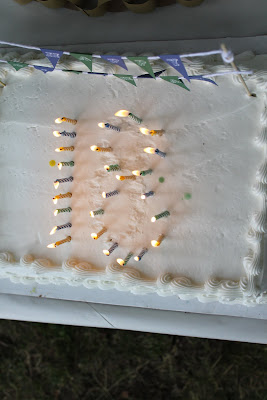 It was a very successful party and the party girl was happy with the outcome! I was happy that everything turned out how I wanted and I kept myself under budget! 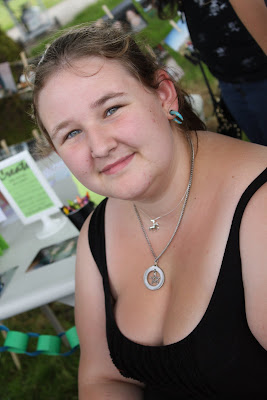 I love hearing from you...thanks for taking the time to stop by! :)